An impression from our January intern, Ora

This past January, I had the incredible opportunity to work with Midwest Food Connection (MFC). Part of my internship consisted of working alongside the MFC teachers who are visiting guest teachers at many different schools within the metro area. I got to assist the class in making winter vegetable stew and pasta from scratch. I got to role-play discovering food in a garden and grinding up wheat to make flour. The program teaches kids a wide variety of cooking skills as well as life mentalities such as the two-bite rule, at which the students are encouraged to try a new food twice before deciding they dislike it. From the students’ enthusiastic faces when they taste a new fruit or volunteer to help stir the veggies, I can tell that this program is making an impact on the kids’ understanding of food by encouraging a sense of excitement, curiosity, and respect with growing, cooking, eating, and composting food.

Along with my time in class, I had the opportunity to work with current 5th graders at Northrop Urban Environmental Learning Center. MFC has been with these students from kindergarten through fifth grade. Over the years, the students engaged in many lessons ranging from Buzz on Bugs to What is a Co-op. MFC believes strongly in the importance of food education and MFCs relationship with Northrop is a great example of how we hope to expand our program in the metro area. To demonstrate the impact MFC can have on students who have been with the program for six years we collected open-ended responses from three 5th grade Northrop classes. In total, we collected responses from 72 Northrop 5th graders. In each class, students were asked to write down, or draw, a memory, or memories, they have with Midwest Food Connection. Before passing out paper for them to write down their responses, we had two students in each class willingly share a memory they had with MFC to act as the examples for the class. Once students understood the assignment, we allotted them about five minutes to freely write or draw. Almost all responses were written. The pie chart below shows analysis of the 72 responses. 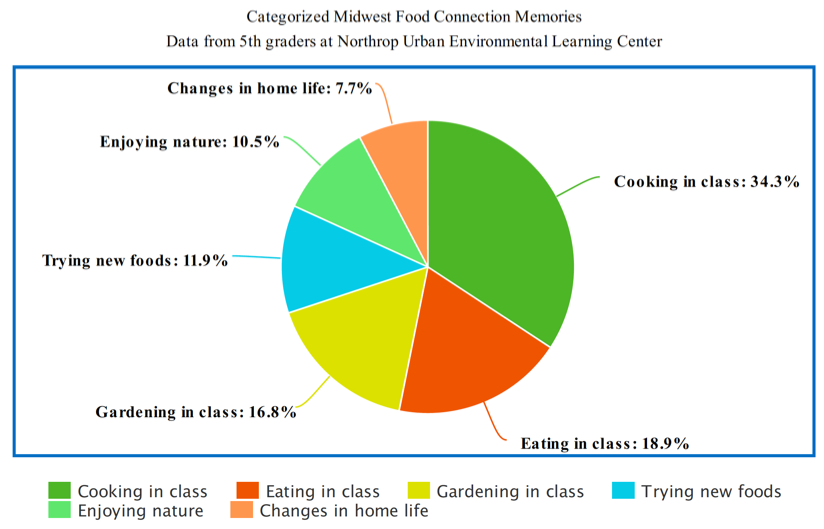 Cooking in class: The student mentioned cooking with MFC, specifically when they mentioned having enjoyed cooking something but did not specify eating it.

Gardening in class: The student mentioned gardening at school.

Trying new food: The student mentioned trying a new food/dish in class or in general, mentioned that they ‘would have never tried that otherwise,’ ‘it was actually good.’

Enjoying nature: The student mentioned enjoying nature, an example is walking outside in the garden or learning something new about nature, drawing their own garden/plants.

Changes in home life: The student mentioned buying locally-sourced foods/shopping at a Co-op, mentioned gardening at home, mentioned cooking an MFC recipe at home, used the word healthy or the equivalent.

Overall, students had positive memories to share, often expressing deep appreciation for a specific lesson or the MFC classes in general. The most popular response mentioned their excitement around cooking, and the top three mentioned MFC recipes were the Incred-herb-ly delicious pizza, winter vegetable stew, and a salad with dressing. From personal experience sitting in on the MFC classes, I can say that they are engaging, interactive, informative all while sharing information and skill sets that are lacking in our school systems presently. While I was with MFC for a short time, it was such a privilege to get to hear all the wonderful memories these students had because it demonstrated to me just how impactful this program is over time.